Apart from the numbered series produced by the Raspberry Foundation, in the year 2015. they were inclined to take out a new range called Pi Zero, which are still inexpensive but with less power than their sisters. From that batch, the models are also known Pi Zero W and Pi Zero WH, each with few characteristics different from the other.

When launching the first of the three Zeroes, its price was only 5 euros and is, according to statistical data, one of the smallest on the market, so much so that in its promotion one of the magazines specialized in the brand pasted it to its cover as a gift for its subscribers, giving a sample of how incredibly portable the card is.

In the midst of it all, the good news is that Pi Zero is also capable of moving an operating system with little difficulty as well as certain applications.. We are going to know it a little more in depth, with its characteristics and main functionalities that we can give you.

What is the Raspberry Pi Zero and what is this mini single board computer for? 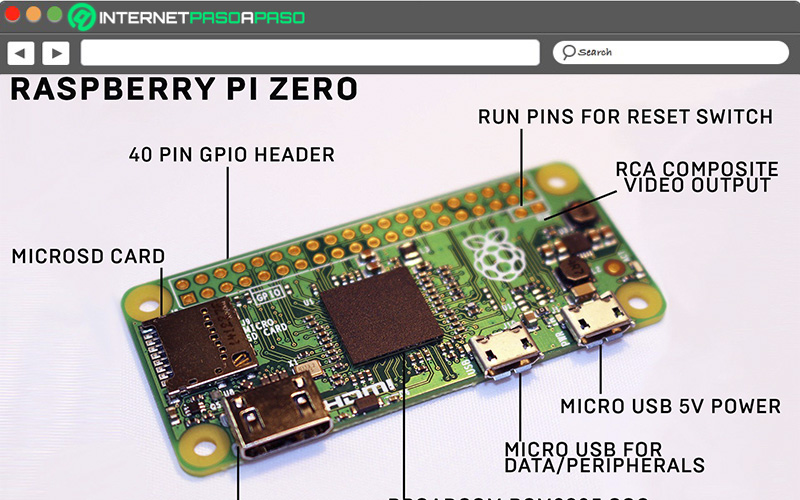 In the wave of mini-computers appears this Pi Zero series, capable of moving the Raspbian operating system and is up to a 40% more powerful than the first model released by the Foundation, although lower than those it has published to date. Its design is compact and just by acquiring the rest of the peripherals you will be able to enjoy its benefits. Pi Zero is a board to which you can integrate a surveillance camera and create a home security systemIt also serves to develop robotics, home automation and visualization projects.

What are the most impressive features and functions of the Raspberry Pi Zero?

In this section, we are going to talk about the first version and the add-ons that have the next two updates that were featured from this series.

The Pi Zero W version includes the following features in addition to those already mentioned:

The rest of the specifications are the same as the other models in the series.

Raspberry Pi Zero performance Is it the best option today?

The characteristics of this hardware are interesting, it is comfortable to wear, consumes little energy, is very light and is compatible with various formats. But nevertheless, is slow with respect to other models of the same gender. The mini USB ports and adapter that you have to have to add a monitor also add up against.

The same brand has other more advanced models that could be used for your projects, however, for the price and with versions including Wi-Fi and Bluetooth, is an option on the table for developers with a tight budget or those who want to start a test development.

Usefulness of the Raspberry Pi Zero What can we do with these models of single board computers?

Without any inconvenience it acts as a low priced laptop. Fully supporting the distributions of GNU / Linux, leaves the door open for the use of the complete office suite, for the fulfillment of different functions within the home or for school work.

The installing a webcam is another of the good functions that take advantage of this card, integrating it with other services to improve security. With the strengthened integrated connectivity, allows its specific use to play, work, educational and scientific projects, as well as the reproduction of audiovisual material. Editing the latter is slow due to its technical characteristics.

Versions of the Raspberry Pi Zero What are there and how to choose the best one that we can buy?

A little above we talked about the three models that this series of Pi Zero, which are the Pi Zero v 1.3, Pi Zero W and Pi Zero WH. All three have practically the same characteristics as we saw in the technical specifications table. Integrated Wi-Fi is what makes the difference. Of the rest, both en processor, RAM and ports is an identical card. The updates have not come as a surprise to his followers.

The advantage that the Pi Zero series has had is the size, they are much more compact having only 9 grams of weight. We can also add that they can be equipped for most projects. By the last of the updates, it is clear that it is the most complete of the series.

Our recommendation is that you analyze the project you plan to develop and make the decision based on the prices of each of the lines. As a general rule, when it comes to these mini computers, you have to take into account the adapters and cables that you have to buy to put them into operation.

We will show you below some of the projects that you can carry out with your Raspberry board:

The project allows wireless music streaming from Apple. With a pHAT-DAC card, a Wi-Fi dongle, an AirTunes emulator from Shairport and of course a speaker, you can bring to life this accessory that plays wirelessly regardless of an iPad or an iPhone.

This is an interesting project but at the same time very popular at the present time. We refer to create a small self-driving vehicle that moves on a track. The idea is based on Python and the instructions are straightforward even if you have little or no knowledge of the area. It is a way of learning and to show others the innovations that you are capable of making.

The main element to get of course is the skateboard, but you will also require a small battery, a motor with its controller and the Raspberry Pie Zero will be the brain of the entire operation. You can save a little money by doing it yourself at home.